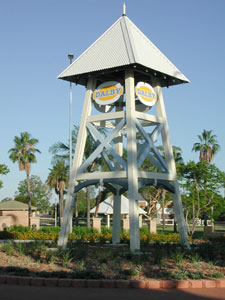 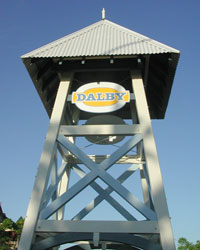 This ensured excellent decay resistance of the housed joints. The tower was painted in our yard after assembly and shipped fully painted. The base and roof assembly were delivered as two completed units.

The following article is from the Dalby Herald Friday 12th October, 2001

The new bell tower at the corner of Roche and Cunningham streets was erected on Sunday morning as part of the CBD beautification program.

Technical works supervisor for Dalby Town Council, Mark Hayes, said it took about half the day to put up.

"We had to close off the intersection but fortunately everything went to plan," he said.

Four council workers were required to put the structure in place, while two massive cranes were also utilised.

The tower is eight and a half metres high with a three metre base and was built by Outdoor Structures Australia from Gatton.